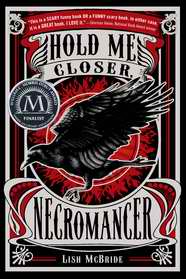 Sam leads a pretty normal life. He may not have the most exciting job in the world, but he’s doing all right—until a fast food prank brings him to the attention of Douglas, a creepy guy with an intense violent streak.

Turns out Douglas is a necromancer who raises the dead for cash and sees potential in Sam. Then Sam discovers he’s a necromancer too, but with strangely latent powers. And his worst nightmare wants to join forces . . . or else.

With only a week to figure things out, Sam needs all the help he can get. Luckily he lives in Seattle, which has nearly as many paranormal types as it does coffee places. But even with newfound friends, will Sam be able to save his skin? Hold Me Closer, Necromancer is a 2011 Bank Street – Best Children’s Book of the Year.  (summary courtesy of www.us.macmillan.com)

Lish McBride grew up in the Pacific Northwest. It rains a lot there, but she likes it anyway. She spent three years away while she got her MFA in fiction from the University of New Orleans, where she managed to survive the hurricane. She enjoys reading, having geek-laden conversations about movies, comics, and zombies with her friends, and of course trying to wear pajamas as much as humanly possible. She lives happily in Seattle with her family, two cats, and one very put-upon Chihuahua. Hold Me Closer, Necromancer was her debut novel and was named an American Library Association Best Book for Young Adults and was a finalist for the YALSA William C. Morris Award.

Check out the author’s website Lish McBride and the book’s trailer Hold Me Closer, Necromancer