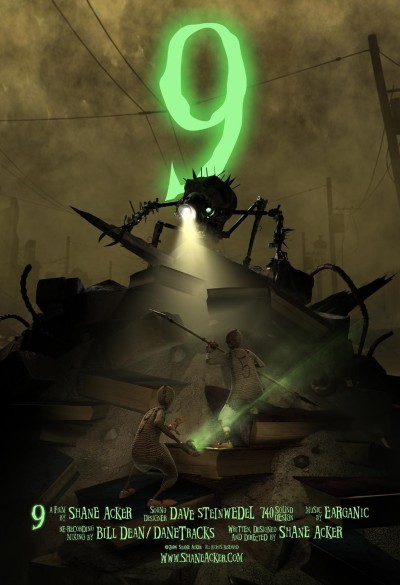 “9” is the vision of student filmmaker, Shane Acker, a reverent Tim Burton devotee, who first developed a 10 minute short of the same name that was nominated for the Academy Award in 2004.  Coupled with the screenwriting skills of Pamela Pettler and the production expertise of the mentor himself, Tim Burton, “9” is a unique, action packed, steampunk-influenced, post-apocalyptic visual dynamo.

“When 9 first comes to life, he finds himself in a post-apocalyptic world. All humans are gone, and it is only by chance that he discovers a small community of others like him taking refuge from fearsome machines that roam the earth intent on their extinction. Despite being the neophyte of the group, 9 convinces the others that hiding will do them no good. They must take the offensive if they are to survive, and they must discover why the machines want to destroy them in the first place. As they’ll soon come to learn, the very future of civilization may depend on them.”  geektyrant.com

“While showcasing a stunning “steampunk”-styled visual brilliance, 9 dynamically explores the will to live, the power of community, and how one soul can change the world.”  9themovie

“9” has a great cast of voices which include, Elijah Wood, Christopher Plummer, Martin Landau, John C. Reilly, Crispin Glover, and Jennifer Connelly.  “9” was released nationwide on 9/9/2009.

“… reminiscent of movies such as “Labyrinth” and some of Steven Spielberg’s earlier work. While children still watching Tigger videos should stay away, older kids will enjoy the bloodless action and awesomeness infused into nearly every frame.”  SF Chronicle

“The action is breathless and intense, the ravenous villains are frightening to behold, and the overall mood is probably too dark and anxious for very young children. But every effort to expand the range of feature-length animation beyond the confines of cautious family fare is to be welcomed, and budding techno and fantasy geeks are likely to be intrigued and enthralled.”  NYTimes