The purpose of the campaign is to raise awareness of issues of censorship by highlighting those works that have been the most targeted for removal or restriction in libraries and schools across the country.

Banned Books Week was launched in 1982 in response to a sudden surge in the number of challenges to books in schools, bookstores, and libraries. More than 11,300 books have been challenged since 1982.

In 2019, the ten most challenged books were:

Reasons: challenged, banned, restricted, and hidden to avoid controversy; for LGBTQIA+ content and a transgender character; because schools and libraries should not “put books in a child’s hand that require discussion”; for sexual references; and for conflicting with a religious viewpoint and “traditional family structure”

2. Beyond Magenta: Transgender Teens Speak Out by Susan Kuklin

Reasons: challenged for LGBTQIA+ content, for “its effect on any young people who would read it,” and for concerns that it was sexually explicit and biased

3. A Day in the Life of Marlon Bundo by Jill Twiss, illustrated by EG Keller

Reasons: Challenged and vandalized for LGBTQIA+ content and political viewpoints, for concerns that it is “designed to pollute the morals of its readers,” and for not including a content warning

4. Sex is a Funny Word by Cory Silverberg, illustrated by Fiona Smyth

Reasons: Challenged, banned, and relocated for LGBTQIA+ content; for discussing gender identity and sex education; and for concerns that the title and illustrations were “inappropriate”

Reasons: Challenged and restricted for featuring a gay marriage and LGBTQIA+ content; for being “a deliberate attempt to indoctrinate young children” with the potential to cause confusion, curiosity, and gender dysphoria; and for conflicting with a religious viewpoint

6. I Am Jazz by Jessica Herthel and Jazz Jennings, illustrated by Shelagh McNicholas

Reasons: Challenged and relocated for LGBTQIA+ content, for a transgender character, and for confronting a topic that is “sensitive, controversial, and politically charged”

7. The Handmaid’s Tale by Margaret Atwood

Reasons: Banned and challenged for profanity and for “vulgarity and sexual overtones”

Reasons: Challenged for LGBTQIA+ content and for concerns that it goes against “family values/morals”

Reasons: Banned and forbidden from discussion for referring to magic and witchcraft, for containing actual curses and spells, and for characters that use “nefarious means” to attain goals

Celebrate your freedom to read by checking out a banned book today at Fort Bragg Library. 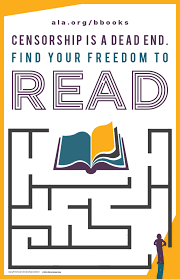 2020-09-25
Peggy McGee
Previous: Follow Your Dream of Higher Education!
Next: New at the Library ~ Kids Literacy Packs for Checkout