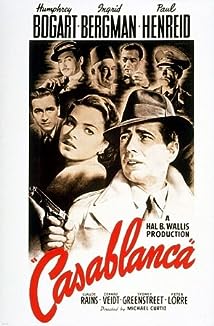 Casablanca, a 1942 American romantic drama directed by Michael Curtiz and based on Murray Burnett and Joan Alison’s un-produced stage play Everybody Comes to Rick’s. The film stars Humphrey Bogart, Ingrid Bergman, and Paul Henreid; and features Claude Rains, Conrad Veidt, Sydney Greenstreet, Peter Lorre, and Dooley Wilson. Set during World War II, it focuses on a man torn between, in the words of one character, “love and virtue”. He must choose between his love for a woman and helping her Czech Resistance leader husband escape the Vichy-controlled Moroccan city of Casablanca to continue his fight against the Nazis.